Losing an eye, whether due to an injury, birth defect, or diseases — such as end-stage glaucoma, diabetes, or cancers like retinoblastoma and choroidal melanoma — can be an emotionally and physically traumatic experience. But all hope is not lost. While vision itself cannot be restored in the affected eye, appearance can be, and for most, this is an important aspect of restoring self-esteem.

After the enucleation surgery has been performed to remove the affected eye from the socket, usually keeping the muscles and bone structure intact, a temporary prosthesis is inserted to allow the patient time to heal. A specialist known as an ocularist makes a custom designed artificial eye and can expertly match iris colors to the remaining eye and form the eye shape to the existing socket. Once the inserted, the muscles and blood vessels can conform to the new prosthetic, allowing for both eyes to track objects simultaneously. The result is a restored appearance.

The prosthetic must be checked yearly and polished to maintain it. As age, weight, and movement all affect the eye socket over time, adjustments will need to be made to the artificial eye to keep it in good shape and in good condition. For people who are blind, ocular prosthetics are available. These are similar to contact lenses and are called scleral covers. 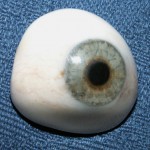 Prosthetic eyes have been around for a long, long time and, thankfully, have come a long way! The ancient Roman and Egyptian priests in the fifth century B.C. were known to have crafted painted clay eyes attached to cloth that were then worn on the outside of the eye socket. Fast forward several centuries later, and you’ll find the first in-socket artificial eyes made out of gold and colored with enamel. Venetians in the 16th century started making glass eyes and dominated that market until the 18th century, when the Germans perfected the technique. In the United States, glass eyes were made starting in the 19th century but stopped during World War II, as the glass was being imported from Germany, and developed plastic polymers instead. Today, prosthetic eyes are largely crafted from acrylic or silicone polymers as well as glass. With the advent of 3-D printing capabilities, there is hope that prosthetic eyes might one day be able to incorporate Wi-Fi signals and transmit visuals to the wearer.

For more information, visit the websites of the American Society of Ocularists so and the National Eye Institute.

Watery Eyes and Their Causes

Vision Awareness Around the World

Should my child get an eye exam during COVID-19?

The Best Foods for Eye Health