Go Outside and Play!

Go Outside and Play!

“Go outside and play!” is a familiar phrase most people have heard or used at some point in their lives. And it turns out, it’s an important one, as it may help to reduce the effects of myopia.

Recent research is showing a worldwide upward trend for cases of childhood myopia, an eye condition where distant objects appear blurry. According to a paper appearing this month in the American Academy of Ophthalmology’s journal, Ophthalmology, it is believed that 50 percent of the world’s population will be myopic by 2050. That’s half the people on the planet, with Asia leading the way, followed by North America.

Given the usage of computers, handheld electronic devices, and television, it’s not too far of a leap to think that too much screen time – or other “near work” like reading – is contributing to this trend. But researchers have been expanding that assumption to consider the possibility that it’s not so much the intense focusing on things up close causing the problem: it’s that those activities are largely done indoors and perhaps it’s a lack of sunlight, specifically, Vitamin D and ultraviolet B rays (UVB), contributing to the rise in myopia.

Lead researcher, Donald Mutti, OD, Ph.D., from the Ohio State University College of Optometry, has been conducting studies into childhood myopia. He notes that children’s eyes are still developing during the ages of five and nine and that the growth causes the distance between the lens and the retina to lengthen, leading to nearsightedness. He hypothesizes that outdoor sunlight stimulates a release of the hormone dopamine from the retina that may slow how fast the eye grows. 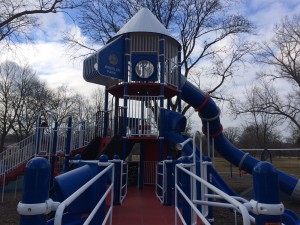 Simply by going outside, sunlight will help to slow the growth of the eye and may help to combat myopia. Kathryn Rose, a leading international researcher of visual disorders at the University of Sydney’s Faculty of Health Sciences, says 10-14 hours a week should do it.

So go outside and play!

Presbyopia-Correcting Eyedrops: The Wave of the Future